Beyond the Bleed: How to Spot and Treat Injuries When There's No Bleeding 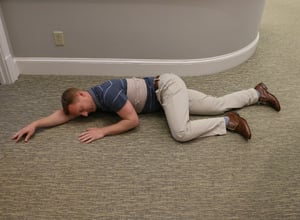 Stopping the bleed is essential to saving lives during an active shooter event or any other type of emergency. But bleeding isn't the only sign of a serious injury, and it certainly is not the only type of injury you could encounter after an act of violence.

In order to treat injuries, you must also know how to identify them. In this article, we'll address three types of traumatic injuries that don't require bleeding control, but that do require the attention of a first responder like yourself.

While internal bleeding is not as immediately life-threatening as a severe hemorrhage, it is still dangerous and should be treated by medical professionals as quickly as possible. However, sometimes internal bleeding is not apparent until later. If you or someone you know is experiencing any of the below symptoms after a traumatic event, get them to a hospital as soon as possible.

Explosives have become an all-too-common tactic used to attack large crowds of people. We've seen this happen on the news more than once, and one of the most recent instances was the bombing at the Boston Marathon on April 15, 2013.

If you are ever in a situation where someone has major burns from an explosive or perhaps even after a car accident, here's what you need to do:

Things NOT to do when treating a burn victim:

Any type of traumatic injury can lead to shock. While shock is not considered to be life-threatening in itself, someone who goes into shock could put themselves and/or others at risk, especially during a violent encounter.

Here are the best ways to prevent and treat shock:

Unfortunately, in situations such as a workplace or school shooting, the above preventative techniques may not be realistic. Use your best judgement and respond as necessary.

The right response starts with the right training.

While blogs and articles are helpful in informing a proper response during an emergency, there's nothing that can compare to hands-on, scenario-based training. Contact us today to schedule an on-site class, or to simply ask those questions you've been mulling over about Active Shooter Response.